Though their respective hometowns of Oklahoma City and Dallas are far from being prominent as hip-hop hubs, J. French and Yella Beezy are putting in work making sure to put their cities on the map. They team up with their new single “Cut You Off,” which is a smooth cut about cutting a love interest off.

]amal French works his ass off. Born and raised in Oklahoma City, rapper, multi-instrumentalist, and producer better known as J French has completed what seems like a lifetime’s music industry experience. Since writing his first rhyme to Devin The Dude’s “Don’t Wait” at the age of 12, he has started his own publishing company, he has worked with several rappers in Oklahoma-Texas scene and Los Angeles scene including RC & The Gritz, Erykah Badu’s official band, and members of TDE. Despite it all, J French is as level-headed as can be. He strictly adheres to a self-imposed requirement to make music from the soul. “I’m so determined to be heard,” says French. “[Music] is so spiritual, it’s connected with our soul and I want people to feel good. I’m going to share with the world what God gave me.” 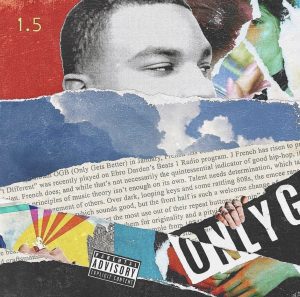 This year, French proved he’s diligently working on his musical growth. Earlier this year in January, he released his self-produced sophomore album, OGB (Only Gets Better). Earlier this month, he dropped OGB 1.5, a complete overhaul of the original opus, with brand new previously unreleased songs, and remixes of fan favorites. Recently, I got the chance to speak with the rapper about everything he has done musically, his new album, and how having a speech impediment began his career.

Growing up in Oklahoma City, music played a big part in his life. Being that his father, Brother Num, is a two-time Grammy Award-winning musician, the apple didn’t fall far from the tree. French started playing instruments at an early age and wasn’t until the age of 12 he discovered his God-given talent. He had a bad speech impediment where he couldn’t say a sentence without stuttering. In speech therapy classes, he wrote rhymes/poetry to remember it word by word. In school he started reciting the rhymes.

“I did it in school and didn’t stutter through the whole thing not once,” notes French. “I just didn’t want to stop doing it because it cured my stuttering problem. One day I said, ‘I can rap.’ By the age of 15 it was attached to me.” Rapping became apart of his everyday life.

French is known to be a one-man-show with his music. He raps, produces, and engineers a countless number of records. One of the records he co-produced on OGB 1.5 is, “A Song For Kanye” featuring Los The Greatest. “This is a song defending Kanye,” notes French. “Society beats people up for being different. It’s almost like the weakest people are becoming the bullies to the strongest people. They don’t care why he wore it [MAGA hat], they just look at the fact he wore it.” French touches on many things in the new project including writing a letter to the late rapper, Tupac, on “God Given” to sharing his testimony on the album’s intro, “Only Gets Better”. “I shed tears writing the intro,” says French. “I talk about the stuff I went through and piecing the puzzle together.”

Towards the end of our conversation, we started talking about the state of hip-hop and how talent is one of the main keys to survive in this game for the long run. “Talent is something you can’t knockoff,” he says. “The way to separate yourself from others is being talented and working hard.” French knows he has the talent, drive, and knowledge on the music business to make a change in the rap game. “I am apart of the growing age of hip-hop. People who are above average hip-hop are winning because they’re authentic and everything they do means something [impacts the world].”

“Any last words?” I asked. “OGB 1.5 is the best album of this year that was done by one person,” he says with assertiveness. “I say my only competition this year is J.Cole.” After finishing this interview, one thing I learned for sure is that J French has confidence and pure talent. Make sure you check out OGB 1.5 and let us know what you think.

Those who follow Oklahoma City’s hip-hop scene know things have been coming up rosy for Jamal French, son of Burning Spear percussionist Brother Num and cousin to Kanye West — perhaps the self-perfected master of the kind of empowering egoism that also turns up in the lyrics of J French and across the history of hip-hop music.